Adopting a puppy or a kitten can be extremely exciting for any family. Many people, however, aren’t sure what to expect from week to week as their new friend grows, learns, and changes. Animals age at a different rate than humans do, so it’s important to take the time to learn about how cats and dogs develop if you want to ensure that you are providing the best possible care for your new pet. At our vet clinic in Campbell, we provide puppy and kitten packages that include scheduled vaccinations, checkups, and other important healthcare services for growing animals. Keep reading for an overview of the most important developmental milestones for young dogs and cats.

Puppies The first stage after a puppy is born in the neonatal stage, which lasts for two weeks. At this point, the puppy’s eyes are still closed and it depends on its mother for everything. This is followed by the transition period when the puppy slowly begins to become aware of the world around it. After a few days of awareness, socialization begins. The puppy will begin to learn to bark and run around. The animal’s teeth will also begin to come in at about this time. Puppies get their first shots at six to eight weeks. After seven months, the dog’s first teeth will be replaced by its permanent teeth. The dog is considered a puppy through the first year of its life.

Kittens A kitten is born with its eyes closed and with no sense of smell. This changes at two weeks, when the kitten’s eyes open. At three weeks, its first teeth start to grow in, and at four weeks it will begin grooming itself. At the five-week point, the kitten is able to run around and will begin socializing. A kitten is not considered adoptable until it is about 8 to 12 weeks old. However, kittens can get their first shots at six weeks of age. Cats are considered kittens until they are six months old. 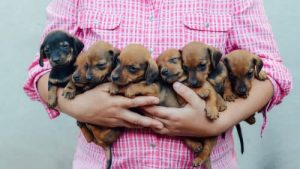 Does your older dog seem stiff lately? The good news is that advances in the care of our pets are allowing them to lead longer lives. Unfortunately,…

Enjoying the holidays with your family is one of the best parts of the season, and staying safe is important for getting the most out of these…