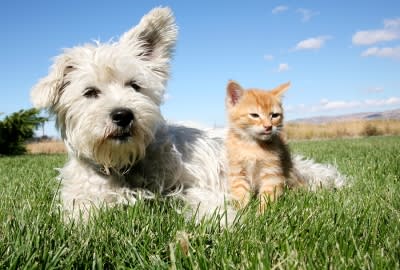 Having your pet spayed or neutered at a vet clinic in Saratoga or Campbell is one of the most important things you can do for your pet—and for all animals. The pet homelessness epidemic is a serious problem: Every year, countless healthy animals are euthanized due to lack of space in shelters and a shortage of adopters. Spaying or neutering a pet means fewer unwanted animals that will end up in shelters. However, there are also important medical reasons to have your cat or dog spayed or neutered. Here are some of the potential benefits of spaying or neutering a pet.

Longer life. Pets that have been spayed or neutered, on average, live longer lives than pets that have not. They also tend to be healthier in general. Spaying and neutering also help in preventing specific health issues. For female pets, spaying—preferably as early in life as possible—reduces the likelihood of breast tumors and uterine infections. For male pets, neutering reduces the chances of having prostate problems and also eliminates the possibility of developing testicular cancer.

Better behavior. Spaying or neutering can have a positive effect on your pet’s behavior around the house. Spaying will stop your female pet from going into heat—which means none of the behaviors that often accompany this cycle, such as loud yowling. They are also less likely to want to “mark their territory” by spraying, and they may also be less aggressive around other animals.

Less roaming. Along with the other health benefits of spaying and neutering, it can make your pet less likely to get lost. Male animals that have been neutered are less likely to try to run away from home to find other animals to mate with. This is particularly important if you have a pet that goes outside at any time, even on a leash.

If your pet is very old or ill, you may be considering euthanasia. It can be a rough decision to make, and it’s certainly a solemn time in a pet…

Dogs are just as susceptible to oral health issues as humans are. Visiting your vet near Campbell or Saratoga can help you keep your animal’s…